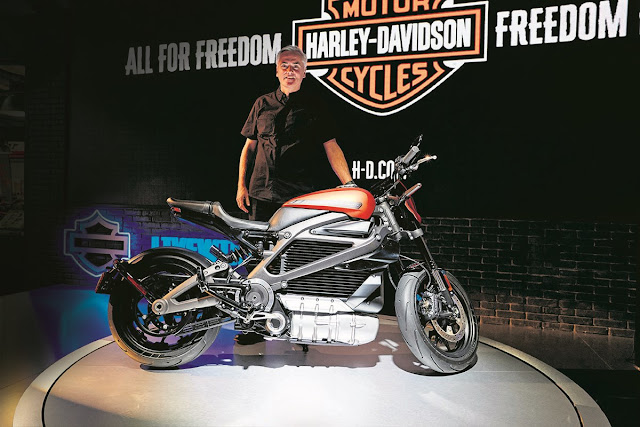 In July 2018, the Milwaukee-based motorcycle company announced the release of its first electric motorcycle, the LiveWire, which is set to hit dealerships in August 2019. It’s the first of a fleet of electric bikes Harley-Davidson plans to bring to market by 2022 to convince a new generation of riders to swing their legs over Milwaukee iron.

The effort is fueled by the inevitable decay of their core customers, who are increasingly aging out and hanging up their helmets. Additionally, millennials largely aren’t fully interested in buying Harley’s burbling, throbbing, air-cooled V-twins.
Harley has reported declining revenue from motorcycles and related products every year since 2014, and US retail sales dropped 13 percent in Q3 2018 compared to Q3 2017. The American brand further announced plans to shut down a Kansas City plant, eliminating 350 jobs and relocating others.

The Motor Company’s plan to be the world leader in the electrification of motorcycles begins with the LiveWire, which is designed to be a nimble urban bike that is easy to ride and even easier on the environment.

As the first mainstream American motorcycle manufacturer to release an all-electric bike, the LiveWire could be the beginning of a renaissance for Harley-Davidson and a massive shift for the motorcycle industry at-large.

Because electric motorcycles do not require gas or oil to operate, they don’t produce CO2 or other fumes that pollute the air. Conventional gas motorcycles on the other hand aren’t the green machines many think they are.

Zero Motorcycles’ VP of Strategy and Sustainability Jay Friedland said in a Plug in America interview that they actually belch out loosely regulated amounts of pollutants like unburnt hydrocarbons, carbon monoxide, and oxides of carbon. If electric motorcycles are the future, it seems wise for Harley to make inroads now.

But Harley faces a unique roadblock when it comes to releasing an electric motorcycle. Harley is defined by what their bikes have represented: rugged individualism, a cowboy ethos, and leather-clad masculinity.

Its motorcycles’ powerplants are perched at 45 degrees, drumming a uniquely syncopated rhythm into the riders’ spines as they lumber down the open road in defiance of popular culture.

The quintessential Harley guy (yes, most are white male boomers) is more likely to see himself as an anti-hero or counter-culture outlaw than an avid environmentalist looking for a reliable commuter to ride to his cubicle and work for the man. Will the old guard see the LiveWire as a flagrant departure from the iconic bikes and gas culture they hold so dear?
“I think the purists will have a hard time with it,” says Brad VanHecker, a Harley rider and enthusiast since 2007. “After 115 years of the iconic Harley, change will be hard within the group.”

And this group is not known to take change lightly. Take the V-Rod for example, which was released in 2002. Sporty styling and Harley’s first liquid-cooled, overhead cam engine (co-developed with Porsche) was a bold departure from the classic hog.

Breaking the mold to attract new riders, the V-Rod stood for everything that is decidedly un-Harley and quickly became a black sheep for purists of the brand. After a 16-year run, the V-Rod quietly vanished from the lineup in 2018. If Harley riders couldn’t accept the V-Rod—an unconventional but fun-to-ride gas bike—the LiveWire could be even trickier to bring to market without alienating the more traditional riders.

In effort to gauge the potential of an electric motorcycle, Harley toured a prototype called Project Livewire through 30 US cities in 2014 where more than 6,800 riders had the chance to test the bike. Many riders were enthused by instant torque at the flick of the wrist and a respectable 0-60 in less than 4 seconds. But not all feedback was flattering.

“It has a top speed of about 92 mph. Which is OK, I guess,” groaned Jay Leno on an episode of Jay Leno’s Garage. Worse, Harley’s prototype was only capable of a 55-mile range in economy mode. Switching the bike over to power mode offered a small horsepower boost at the expense of a reduced 28-mile range, begging the question as to why this mode even exists.

While Project LiveWire’s range is expected to improve for final production, it would have to get a lot better to really hang with the hogs. It isn’t uncommon for riding groups to put upwards of 200 miles a day on Harley’s big bore baggers and touring bikes. VanHecker puts that kind of mileage on his 2009 Road Glide Custom when out with his friends, stopping occasionally on longer rides for fuel and snacks.

“But if [the LiveWire] required waiting some time to recharge,” he says, “they would probably be left behind.”

And then some Harley guys still won’t be able to get past the looks. Its sporty and athletic streetfighter styling is about as far as you can get from the classic cruiser design. “It’ll be a very small niche machine until several issues are overcome like…better styling,” says an hdforums.com user who goes by TwiZted Biker. “It’s just too Buck Rogers-looking for the old school guys.”

Longtime Harley rider VanHecker admitted he actually likes the idea of the LiveWire. “Just like solar panels, I like the direction they are heading. People love engines and the wheels that move them,” he said.

But when it came down to actually buying one, he had a few stipulations. “Either a raise or winning the lottery by the sounds of it,” he joked. “I would still keep or have a gas bike, though.”