York, Pennsylvania (October 31, 2018) -- Harley-Davidson, once strictly a purveyor of gas-powered motorcycles, has decided to go electric. The manufacturer will continue to build internal combustion engines, while diversifying its portfolio with a selection of battery-operated motorcycles.

The first electric offering is the company's Livewire bike, which debuted as a prototype in 2014. Riders around the world were allowed to test drive the concept and their feedback were used to design the real deal. 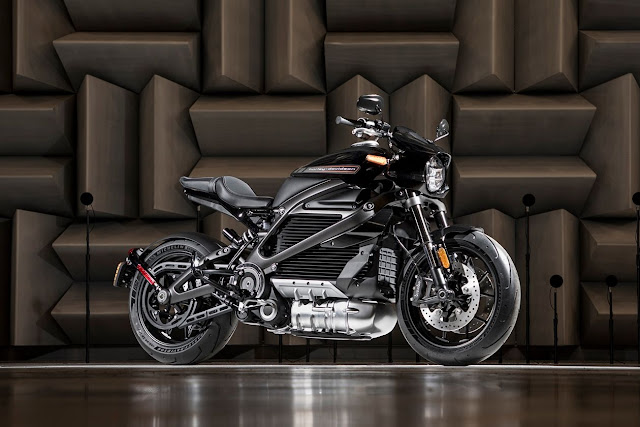 Full details regarding the production-version aren't available yet. What's known, however, is it will be built at Harley-Davidson's manufacturing facility in York, PA, and sales are set to begin in 2019. The first wave of LiveWire bikes will be offered only in North American and select parts of Europe.

As for the bike's styling, it's somewhere between traditional HD, and the company's sport line, Buell, which closed its doors in 2009.

In additional to LiveWire, five other all-electric bikes are slated for release in 2022. Rumor has it, two will be middleweight, and three will be lightweight (bicycle or scooter-sized).

Livewire's design came straight from Harley-Davidson's Product Development Center in Wisconsin. But to help build its electric onslaught, HD announced it will open a new research and development center in Silicon Valley. The West Coast and Midwest facilities will work together to create the zero-emissions lineup.

"This new facility will serve as a satellite for the Willie C. Davidson Product Development center in Wauwatosa, which is where I'm located," explained Sean Stanley, H-D's chief engineer for EV platforms in an article from SAE. "It will initially focus on EV research and development and it includes battery power electronics, e-machine design, development and advanced manufacturing."

"I will be working directly with the EV-systems team there, establishing an EV architecture and building blocks that can support many of the vehicles that we plan to bring to market. At the PDC in Wauwatosa, we'll take those building blocks — that the Silicon Valley center develops — through the product development cycle to prepare for commercially available vehicles."

Video of the New Electric Motorcycle

Harley Davidson recently celebrated its 115th anniversary, and quite frankly, the company needs something new. Demand for its motorcycles in the U.S. has declined drastically, causing sales to drop 13.3 percent for the quarter compared to last year.

There are various reasons for the drop in sales. In additional to the fact that HD has traditionally attracted an older clientele that's no longer riding, it also faces a new 25-percent tariff imposed by the European Union on U.S. motorcycles.

Despite the fact the company is struggling stateside, it's doing well internationally. Sales overseas are up 2.6, but still, the company needs to do something at home. LiveWire, and the rest of the electric lineup will hopefully stir up some excitement and get younger people riding.

"EV technology has a lot to offer in the area of new experiences and connections to the motorcycle and environment around you. Simplistic, twist and go riding [as] there's no shifting. Reducing the noise to focus more on the experience of riding. The instant torque, reduced maintenance. A bike that's easy to control for novice riders, all the way up to performance that intrigues experienced riders," Stanley states.

Here's hoping the innovative bike will breathe new life into a 115-year-old company.