Sao Paulo, Brazil (June 2, 2022) - A video has surfaced that shows a driver allegedly involved in a hit-and-run case driving away with the motorcycle attached to the front of his sport utility vehicle. The incident took place in Sao Paulo, Brazil, and has been posted online by ViralHog. 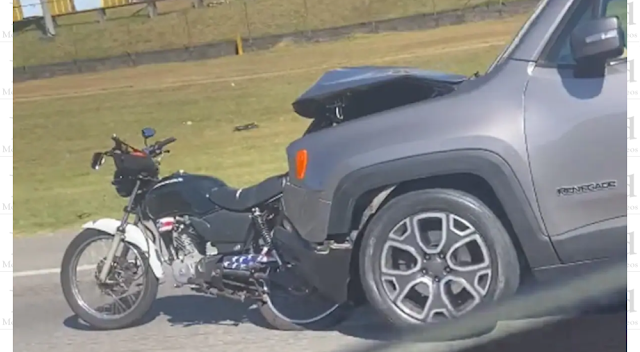 Screenshot of video posted on ViralHog
The video, made available by Maíres Rodrigues, says that the vehicle driver ran over a motorcyclist and did not stop to provide help. The person who shot the video followed the vehicle to catch a glimpse of the driver. But as soon as the car approached the fleeing driver's vehicle, the motorcycle that he ran over was seen attached to the front of the SUV.

ViralHog further said in the description of the video that the driver was stopped a few kilometers ahead by the police and detained. The motorcycle rider was, meanwhile, rushed to the hospital where he is recovering.

Info from Licensor:
Immigrant highway towards the coast, we saw the car driver running over the motorcyclist who did not stop to provide help, we followed him on the run and realized that he had the motorcycle that he ran over attached to the front of the car. We shouted a lot asking him to stop and even so he continued with the escape.
The injured person was rescued and taken to hospital and is currently recovering, the offender was stopped kilometers ahead by the police, and was detained at the police station.

Beverly Hills, California, USA (June 1, 2022) - A suspected thief is in custody thanks to a flying tackle by two motorcycle cops. The video shows the two cops ditching their motorcycles in the middle of the street to catch the suspect, prompting praise online for the swift arrest. 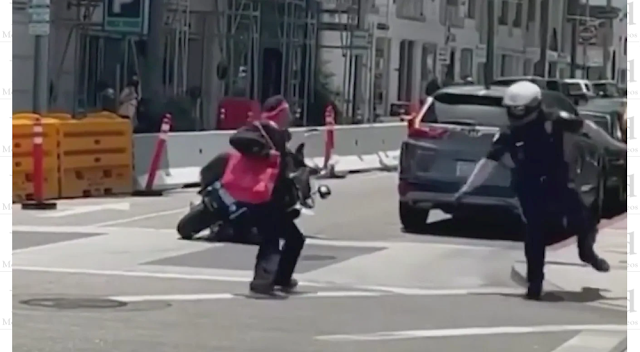 According to ABC 7, the officers were patrolling in Beverly Hills when the suspect ran across their path on Rodeo Drive. In the video, a man carrying a pink bag sprints across an intersection at the same moment two motorcycle cops are driving through.

One officer jumps off his motorcycle, which he lets drop to the pavement, and tackles the suspect to the ground, the video shows. Another motorcycle officer arrives seconds later and the scene repeats itself.

The officers and suspect were not immediately named. It’s unclear if anyone suffered injuries.