Mongols MC: The club talks about being in Fort Worth

Fort Worth, Texas (September 22, 2018) BSB — On Saturday night, members of the Mongols motorcycle club stood outside a bar in the Fort Worth Stockyards, talking with bar employees and passersby.

A woman across the street appeared to take a picture of the four men, who were all wearing black leather vests with patches saying “Mongols” and “Lifetime member.” 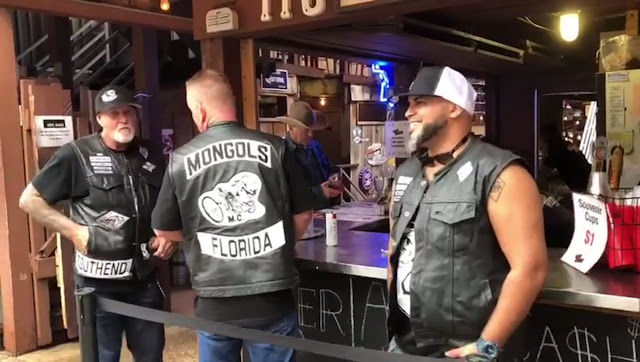 Two of them, one of whom introduced himself as Blade, yelled across the street.

“Wait, take another one!” he said, posing with his arm around another member and smiling broadly.
The woman put her phone down and walked away. 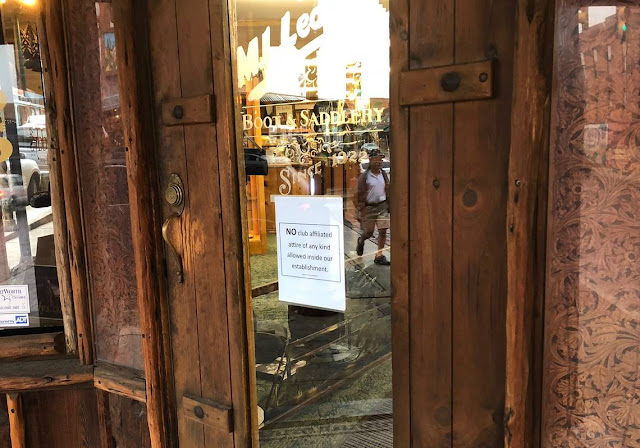 Some establishments at the Stockyards had signs on their doors stating, “NO club affiliated attire of any kind allowed inside our establishment.”

The Mongols have been called the “most violent and dangerous” outlaw motorcycle club in the nation by Bureau of Alcohol, Tobacco, Firearms and Explosives agents, according to the Department of Justice website.

On Friday and Saturday, local police beefed up their presence in the Fort Worth Stockyards after ATF warned the Mongols were planing a rally there. An ATF intelligence note warned the Mongols were planning a “run” in the Stockyards Friday or Saturday. The notice, copies of which were sent to the Star-Telegram, stated the club members were expected to start arriving late Thursday and there could be anywhere from 300 to 700 bikers.

The four Mongols members outside White Elephant bar on Saturday night said all of this is all misconception.

None of the men wanted to provide their names. Only one, who had on a backwards hat and others described as their “boss” provided a nickname; Blade.

“We like to go places and hang out with our brothers and spend money in local shops,” he said.

He said he was not allowed to say how many members were at the Stockyards, but pulled up a picture of the group from the night before on his phone. About forty men, most wearing black leather, stood on a stage at a Stockyards bar. He pointed at signs on nearby doors that banned “club affiliated attire of any kind.” He said those signs kept the Mongols out of most shops and bars in the Stockyards. 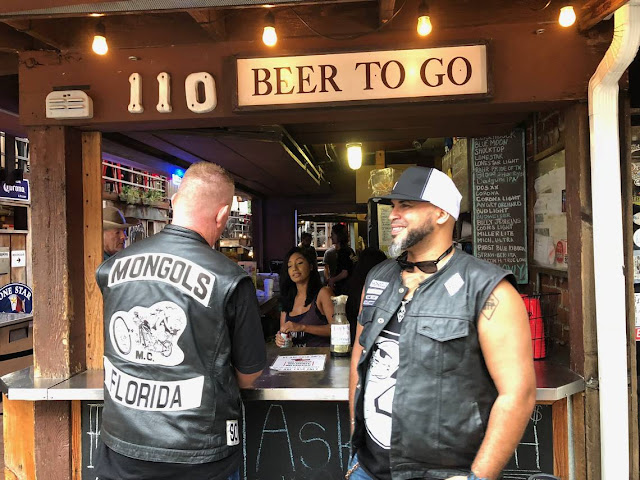 “I went into a shop to buy a Fort Worth t-shirt for my daughter and wife, and they wouldn’t let me in. I’m fine with it, but my wife is gonna be like, ‘where’s my souvenir?’” Blade said. The only place that let them in, he said, was the White Elephant Saloon and the Love Shack.

The saloon and Love Shack Manager Bill Chmielewski said the Mongols have been great customers.

“They’re very respectful, they’re been very kind to my employees. That’s the kind of customers we want,” he said. Another Mongols member, whose vest said “Florida” on the back, said the stigma against them is created by the media and shows like Sons of Anarchy, which portray motorcycle clubs as lawless and violent.

“We like to spend a ton of money and to have a good time,” he said. “We’re just like any other organization.”

Another member, who was wearing a black and white hat and sunglasses on his neck, chimed in.

“We’re not bullies, we’re not disrespectful. We tip and we tip well,” he said. “We’re a brotherhood. We are family.” In their note, ATF wrote one of their concerns was possible violence between the Mongols and their rival, the Bandidos Motorcycle Club. “Although only operating in Texas for a short period of time, violence has already transpired between the two adversaries in Houston, Fort Worth, and Dallas,” the ATF stated in its note.

“Several representatives of the Fort Worth Police Department have spoken to the local Mongols chapter president and he assured us that the local Bandidos chapter has been made aware of this gathering and that they do not expect any issues,” Perez said in an email. “The concern with this particular gathering is the number anticipated to participate.” However, the four members said law enforcement was overreacting to the Mongols’ presence.


“More police officers showed up here than Mongols,” the man with the Florida vest said.

Fort Worth police issued a statement on social media on Friday about the motorcycle rally.

In June, 21 members and associates of a Tennessee chapter of the Mongols were indicted by a federal grand jury with various alleged crimes, including racketeering conspiracy, murder in aid of racketeering, attempted murder, kidnapping, robbery and large-scale drug trafficking.

Earlier in the year, the same chapter had 19 members and associates indicted on charges of racketeering conspiracy, murder, drug trafficking and other related crimes.

As of 8 p.m. Saturday, there were no violent crimes reported in the Fort Worth Stockyards related to the Mongols.

Member of C.C. Riders: ‘These guys are my brothers'

Receive a tax receipt: After you donate, you’ll get your PayPal Giving Fund tax receipt by email