Kokomo, Indiana, USA (March 18, 2021) - Police are investigating after four suspects allegedly stole four motorcycles and rode them out of a Harley-Davidson dealership in Kokomo, Indiana. 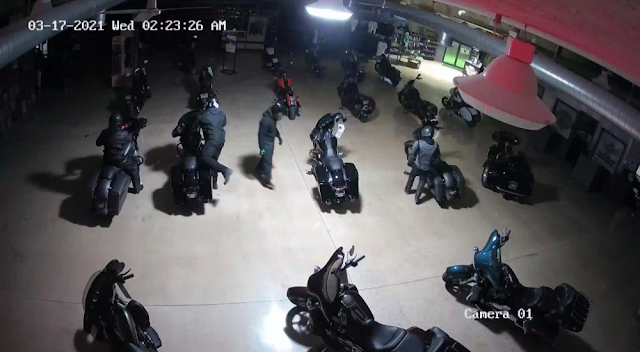 The Kokomo Police Department responded to Harley-Davidson, located at 335 S. 00 E.W. in Kokomo, on a report of a burglary. Surveillance video from inside the business showed four suspects enter the showroom floor at approximately 3:22 a.m.
The suspects selected one 2020 Street Glide Special motorcycle and three 2021 Street Glide Special motorcycles. The suspects were able to start the motorcycles and ride out of the building through the main showroom doors. Surveillance footage showed the suspects fleeing southbound on State Road 931.

Sturgis, South Dakota, USA (December 4, 2020) - Confident that open air festivals can be held responsibly and hot off the heels of a successful 2020 event, the Sturgis Buffalo Chip is blowing the gate wide open for the 81st Anniversary of the Sturgis Rally with the largest live entertainment announcement since the pandemic began. The American Badass, Kid Rock, will take the legendary Wolfman Jack Stage at The Largest Music Festival in Motorcycling® on Sunday, Aug. 8, 2021. 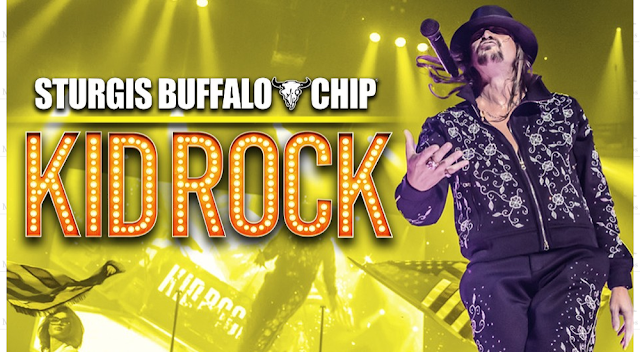 In addition to kicking off the campground’s festival lineup, the Buffalo Chip® has partnered with two dominating names of the Sturgis Motorcycle Rally, Black Hills Harley-Davidson and Liv Hospitality, to award a once-in-a-lifetime $30,000 King of Sturgis prize package to one winner and three of their friends. The King of Sturgis™ Giveaway registration is now open. The Kid Rock video announcement can be seen here below. Entertainment is free with camping.

“We know from last year that outdoor events can be safely held when proper precautions are taken,” said Rod Woodruff, President and CEO of the Sturgis Buffalo Chip. “The majority of people act respectfully and practice social distancing when they are expected to act responsibly. Plus, we feel good about the highly effective vaccines coming soon to market.”

The Buffalo Chip took the pandemic seriously in August 2020 and it plans to do so again in 2021. The 2020 event included social distancing built into the amphitheater, prominent signage providing information on COVID-19 and encouraging social distancing, hand sanitizer dispensers throughout the campground, free face coverings for those entering the amphitheater and a strict backstage policy that included mask requirements, temperature checks and limited in-person contact.

The Buffalo Chip’s nine-night music and motorcycle festival is an open-air, outdoor festival located on a campground with over 600 acres on which guests can spread out. The venue is not a closed environment like a crowded indoor bar. With the safest environment offered at the Sturgis Rally, the Buffalo Chip will again provide guests the safest place to camp and experience the benefits of social interaction, without restricting their personal rights and freedoms.

“We’ll be here in 2021 celebrating the freedoms we thought to be the birthright of all Americans, and I can think of no better way to kick off our 40th anniversary as a campground than to bring back legendary fan favorite Kid Rock. To top it off we’re going to drop a $30,000 bomb of amazing prizes on someone,” said Woodruff.

When asked why an event like the Buffalo Chip is important, Rod Woodruff continues, “Our event provides people the freedom to come together despite differences, share moments and make real human connections. That’s something no amount of internet or TV can ever provide. It is essential for people’s mental health, self-worth and general well-being that they get out and socialize.”

The outlook of the live music industry is optimistic. Bands are announcing tours again, and several major music festivals have announced events in summer 2021. With the recent news of successful vaccine trials, the Sturgis Buffalo Chip is optimistic that by August 2021 the pandemic will be on its way to being under control.

The world-class Buffalo Chip concerts and giveaways are just a piece of the many activities happening at the Buffalo Chip Campground for the 2021 rally. Visitors will have the opportunity to experience countless events including legendary rides, powerful freedom celebrations, top-tier bike shows, white-knuckle racing events and so much more. Entertainment is free with camping. More announcements coming soon.

About The Sturgis Buffalo Chip

The Sturgis Buffalo Chip® is the award-winning leader in music and motorcycle lifestyle experiences. Hailed as The Largest Music Festival in Motorcycling® and The Best Party Anywhere®, it has been the epicenter of the annual Sturgis Motorcycle Rally since its establishment in 1981. Every August, the Buffalo Chip brings together the world’s largest gathering of music and motorcycle fans, with visitors from all 50 states and over 20 countries. As the first and leading entertainment destination for the motorcycle enthusiast, it remains one of the world’s most televised and longest running independent music festivals.
Located three miles east of Sturgis, SD on 600 creek-fed acres, it offers nine nights of world-class concerts, multiple stages of entertainment, races, motorcycle shows, a swimming hole, bars, food, showers, cabins, RVs, camping and more. The Chip’s entertainment is free with camping.
SOURCE: Sturgis Buffalo Chip
at 9:32:00 AM

Milwaukee, WI, USA (September 25, 2020) - Harley-Davidson has decided to call it quits in India owing to low demand of its bikes. The company will stop the sales and production of motorcycles but will continue to offer after-sales services through its existing dealership network. The decision to end operations in India is in line with the company's 'Rewire' strategy under which it will focus only on select markets.

Harley-Davidson will also wind up operations from various other markets that project low sales and profitability for the brand. The iconic American brand commenced operations in India in 2009 and currently has a wide range of products in its portfolio. However, the demand for H-D bikes in India has plummeted over the last few years.

Why is Harley-Davidson exiting the Indian market?

Harley-Davidson is ending operations in India as part of 'Rewire' strategy. The company reported a $96 million loss between April 2020 to June 2020, which is the first quarterly loss for the motorcycle maker. Despite an almost cult-like following in several markets besides the US, Harley-Davidson has been facing financial difficulties for quite some time now.

To counter this, the motorcycle maker had devised 'Rewire' strategy a few months ago that which included consolidation of operations to profitable markets like North America, Europe, and some parts of Asia. The company will also wind up operations in several low profitability markets like India.

According to figures released by SIAM (Society of Indian Automobile Manufacturers), Harley-Davidson sold only 103 units of motorcycles in India in July 2020 and 176 units last month in the country.

There were rumors that Harley-Davidson was considering to partner with an Indian company to share the financial load in the country and localize production. This would have been similar to what Triumph and KTM have achieved with Bajaj Auto. However, the company is now calling it quits in India as of now.

Harley-Davidson noted that it will close the manufacturing facility in Bawal and significantly reduce the size of its sales office in Gurgaon. And as for the after-sales services, the company's dealer network will continue to serve customers through the contract term.

Harley-Davidson, in an official statement, said, "Harley-Davidson, Inc. today announced that as part of The Rewire, an overhaul of its operating model and market structure, the company is changing its business model in India and evaluating options to continue to serve its customers. Harley-Davidson plans to close its manufacturing facility in Bawal and significantly reduce the size of its sales office in Gurgaon. The company is communicating with its customers in India and will keep them updated on future support. The Harley-Davidson dealer network will continue to serve customers through the contract term."

Milwaukee WI, USA (September 18, 2020) - Harley-Davidson is shelving HOG magazine and replacing it with a newer and more upscale title, The Enthusiast, as it seeks to broaden its aging fan base with younger riders.

The first issue hits today with actor Ewan McGregor and Charley Boorman on the cover. It’s being mailed to 500,000 Harley-Davidson owners in the US and another 150,000 overseas. Single copies are available on the company’s Web site. 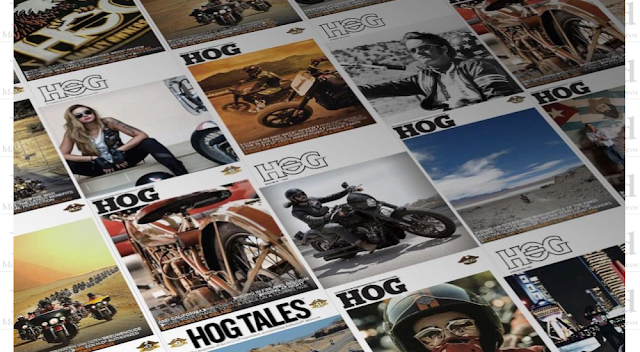 “In a year when so many people have been stuck inside, we passionately believe in inspiring riders and aspiring riders to get out in the world to rediscover adventure through socially-distanced riding,” said Harley-Davidson CEO Jochen Zeitz, who was hired in May to woo new customers and revive sales.

Zeitz took the reins amid a five-year sales slump that saw the iconic American brand post a $23 million loss in the first six months of fiscal 2020 on revenue of $2.2 billion.

“This is the return to a great tradition,” said Jochen Zeitz, Harley-Davidson President and CEO. “We believe today The Enthusiast title is more relevant than ever. In a year when so many people have been stuck inside, we passionately believe in inspiring riders and aspiring riders to get out in the world to rediscover adventure through socially-distanced riding.”

The first new issue of The Enthusiast magazine appears in the United States this week with a cover story featuring Ewan McGregor and Charley Boorman, stars of the new Apple Original series “Long Way Up,” premiering Friday, September 18 on Apple TV+. The series follows the epic motorcycle adventure McGregor and Boorman experienced on a 13,000-mile journey aboard two Harley-Davidson® LiveWire™ electric motorcycles through South America, Central America and Mexico.

Printed four times annually, with a circulation of more than 500,00 print copies in the United States plus 150,000 copies internationally, The Enthusiast magazine is the most broadly circulated motorcycle magazine in the world. First published by Harley-Davidson in 1916, The Enthusiast magazine was among the first consumer motorcycle magazines in print, although Germany’s Motorrad (1903), Italy’s Motociclismo (1914), and Motorcyclist magazine (1909) in the United States preceded it.

From 1984 until 2008, Harley-Davidson produced two separate publications for owners and riders, The Enthusiast magazine and HOG Tales magazine. In 2009 they were merged under the HOG Magazine title into one new magazine that drew content inspiration from both publications.

With the movement of Motorcyclist to a digital format in 2018, the Enthusiast magazine, including the HOG Magazine years, remains the oldest continuously printed motorcycle magazine in the United States.

All Full and Life Harley Owner Group members will continue to receive a complimentary subscription to The Enthusiast magazine as part of their membership benefits. Free App versions of the magazine are also available for iOS and Android phones and tablets. Harley-Davidson is also exploring new ways to deliver the print magazine in the United States, including by selling single copies of the magazine on the H-D® eCommerce site and through limited retail establishments, including at Harley-Davidson™ dealerships and select boutique motorcycle shops. For more information and history about The Enthusiast magazine, visit h-d.com/enthusiast.