Santa Ana, California, USA  (January 12, 2019) — A federal jury in Santa Ana found Friday that the U.S. government can seize the Mongol Nation motorcycle club's trademark logo featuring a Genghis Khan character on a bike, along with various items of personal property such as leather jackets and weapons, in a closely watched case that has first First Amendment implications. 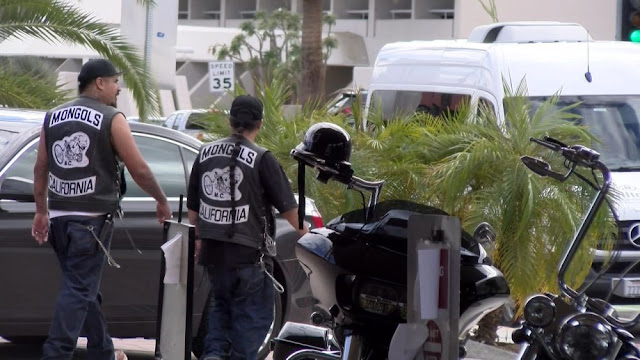 The verdict came in the forfeiture of assets phase of the case against the club, which was convicted by the same jury on Dec. 13 of racketeering and conspiracy to commit racketeering.

Now the trial moves to a third phase, in which U.S. District Judge David O. Carter will decide how the forfeiture is carried out. But he has previously said the issues in the novel case will likely wind up being decided by a higher court.

"You're both setting yourselves up for an appeal that will go to the Ninth Circuit and then to the U.S. Supreme Court,'' Carter told the attorneys last month.

Until the verdicts, Carter said he lacked jurisdiction.

"Now the constitutional issues are ripe,'' Carter said after the verdicts.

The attorneys in the case will file legal briefs arguing whether the verdicts should be tossed out legal technicalities or on constitutional grounds. Carter will hear oral arguments on Feb. 28.

Las Vegas attorney Stephen Stubbs, who represents the Mongols, told reporters after the verdicts, "This is the first time ever in U.S. history where the government is banning symbols... It's a sad day for this country, but the fight continues.''

The main items at issue are three trademarks, including the logo bearing the Genghis Khan character. But there are many other items of property seized by authorities such as guns, ammunition, leather jackets and documents of membership lists that could be taken away.

Authorities do not intend to try to take away leather jackets from members, for instance. Under trademark law, however, the government will have to use the copyrights in some way or another so they don't lapse into eminent domain.

If Carter blocks the government from seizing control of the trademarks, the club could still face a $500,000 fine for a racketeering conviction.

Stubbs told reporters after the December verdict that the club, which was formed in late 1969 in Montebello and has members nationwide, is not a violent criminal organization. He said all of the alleged crimes discussed in the trial occurred under the leadership of past president Ruben "Doc''
Cavazos, who was ousted.

"The Mongols recognized he was doing things that were inappropriate and they kicked him out,'' Stubbs said then. "The Mongols are not a criminal organization and gang.''

But under the conspiracy conviction, the jurors validated multiple alleged incidents of violence, including murders and attempted murders as well as drug dealing.

Under the racketeering count, the jurors did not find the government should have the authority to seize the assets, but they cleared the way for it under the conspiracy count.

"I feel it was clear it was a compromise verdict,'' Stubbs said.

During the five-week first phase of the trial, Assistant U.S. Attorney Steven Welk argued that the patches Mongols wear on their leather jackets -- depicting a muscle-armed, ponytailed Asian man on a motorcycle -- are meant to be "messages and signals'' to rival gang members and even the general public that Mongols should be feared.

Welk noted that Mongols are instructed to not wear their leather jackets with patches in a car, and when they drive a car they are taught to fold them in a way to conceal their affiliation with the club from police.

"It's all about protecting themselves because they are a paranoid organization,'' Welk told the jury. "They're fearful and deeply suspicious of the government.''

He presented testimony in an effort to show a "lengthy parade of cruelty'' by the club's members. Welk argued that the club's members commit a range of crimes from drug trafficking to murder, all in service to the organization and at the direction of its leaders.

And he said when club members commit murder, they wear a specific skull-and-crossbones patch like a badge of honor.

But the club's attorney, Joseph A. Yanny, accused the government of going after the organization for racial reasons.

"I believe this group has been targeted because they have a lot of Mexican-Americans in there,'' Yanny said during his closing argument last month.

Yanny argued that the members who have committed crimes were kicked out for violating "zero tolerance'' policies against illicit activity that draws the attention of law enforcement.

Yanny accused federal prosecutors of taking the "wrongful acts of a few individuals'' and escalate it to a "group conviction.''

"These are ordinary people,'' he said of his clients. "They are hardworking people. You don't see the Hell's Angels here. You see the Mongols and minorities are easy to pick on and they typically don't fight like these guys do.''

Among the people who testified during the trial was former pro wrestler and ex-Minnesota Gov. Jesse Ventura, who joined the Mongols in the 1970s.

Ventura told City News Service that he considered the government's attempts to seize the club's trademark as a threat to the First Amendment.

"This is bigger than the Mongols club,'' Ventura said last month. "You've got the government... telling you what you can and cannot wear.''

He added, "The First Amendment is to protect unpopular speech. ...  Some people may think the Mongols are horrible, but they still have equal rights under the Bill of Rights. ... Who's next? The Shriners? Where does it end? It's a First Amendment issue top to bottom.''