Los Angeles, California (February 2, 2019) – The federal government said they're a convicted criminal gang, and Hells Angels consider them enemies. They call themselves the Mongols Motorcycle Club - and they're one of the largest Motorcycle Clubs in the world. 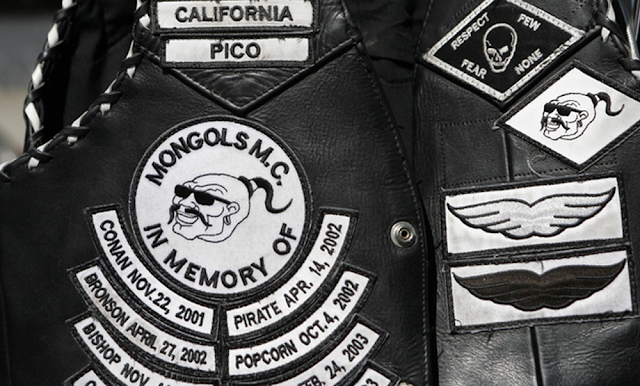 "It's about honor, respect and pride," David Santillan said.

But for this East L.A.-born brotherhood, the last few years have been a fight for survival. They've been under federal indictment for the last decade. And recently, a federal jury in Santa Ana convicted the national club of racketeering, racketeering conspiracy for murder, attempted murder and drug dealing.

More than 75 of their members were convicted - including their former president Ruben "Doc" Cavazos. But the biggest blow of all - hit them where it hurts the most, they lost the rights to their trademarked emblem.

"What the patch means to me and to all my brothers when we ride, it's like a ring in a marriage. It symbolizes our loyalty and commitment to the Mongols Motorcycle when we're out there riding together as a club." Santillan said. Santillan, known as "Little Dave" by club members, is the new national president of the Mongols.

He's been on the front lines of the group's fight against the government, to keep the rights to their sacred symbol. "This is a lifestyle. A culture. A way of life for us. To me, it's a lifetime commitment. I've been in this club going on 23 years," he said.

The infamous patch is a caricature of the founder of the ancient Mongol empire, Genghis Kahn. Prosecutors argue, in order to get or keep their patches, members are encouraged to commit crimes. It's why they've been fighting for years to strip the club of their logo.

There's still a lot of secrecy around the patches and how members obtain them. But if there's one thing club members, their lawyers and prosecutors agree on -- the symbol is a pivotal part of the club's identity.

"If they take away our patch, they can take away everyone else's. It would be a domino effect if they take the case in law for the future, so I don't see us going anywhere. We're just going to continue fighting until the wheels fall off," Santillan said.

U.S. District Judge David O. Carter also doesn't seemed to be fully convinced about stripping the club of their logo. He's invited civil rights groups, first amendment lawyers and trademark attorneys to weigh in on the implications. "Never before in U.S. History has the government come and tried to ban a symbol. Think about that for a second.


How many symbols are there in the United States, from wedding rings to religious symbols? All kinds right? If the government can take and ban a symbol, where does that leave everyone else? And who's next? That's really what we have to look at. That's a really slippery slope," said Mongols general counsel Stephen "Bow Tie" Stubbs.

This case is getting the attention of other motorcycle groups. It's even rumored that their arch-rivals Hells Angels, despite their checkered and deadly relationship with the Mongols, are donating money to fight the cause.

Santillan said the club has spent more than $1 million over the past decade, through fundraisers, donations and club dues, and they won't stop fighting until they win.

"It's a matter of principle at this point - and pride. We're not going away and they're not going to kick us to the curb. Like I said before, we're going to do this until the wheels fall off. We don't care, at any cost," he said