Sturgis, S.D. USA (February 25, 2019) BSB — The city of Sturgis is proposing fees — as high as $5,100 in some cases — that would have to be paid in advance by campgrounds outside city limits if they want ambulance service at this year's Sturgis motorcycle rally. The proposed fees range from $300 to $5,100 and are based on the number of ambulance calls to the campgrounds during the 2018 rally, Sturgis City Manager Daniel Ainslie said at a Feb. 19 special meeting in Sturgis with campground owners. 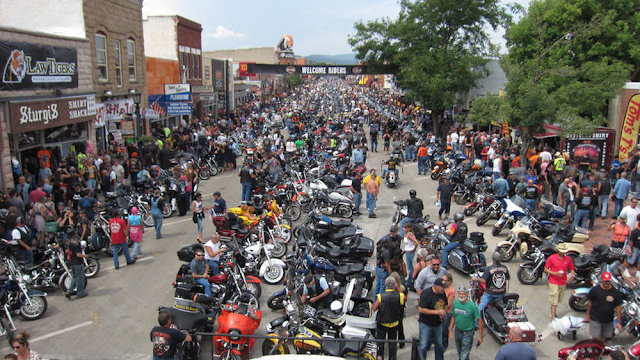 Under the proposal, campgrounds that had no ambulance calls last year would be assessed a $300 fee to cover this year’s rally in August. Those with one to four calls last year would pay $650, those with five to nine calls would pay $1,850, and a fee of $5,100 would be charged to those that had 10 or more calls during the 2018 rally. According to listings on sturgiscampgrounds.com, there are more than a dozen campgrounds in and around Sturgis.

Ainslie said services provided to campgrounds inside the city limits are covered by city sales-tax and property-tax revenues. The city’s proposal is set for discussion before the Sturgis City Council on April 15. If approved, the fees would have to be paid by May 15. Campgrounds not paying the fees by that date would no longer receive city ambulance service.

At the Feb. 19 meeting, Ainslie said during the 2018 rally the city ambulance service responded to 60 calls from campgrounds, amounting to 17 percent of total calls during the rally. Of those calls, he said, 33 percent of patients refused transportation to a hospital after the ambulance arrived and of those transported only 23 percent of the amount billed was paid, creating a more than $25,000 shortfall, he said.

“We travel the distance out there and either we bandage the person up or give them the immediate aid they need and they refuse transport to the hospital, or other times we go all the way out there and no one’s there. That’s a significant cost that there’s absolutely no reimbursement for,” Ainslie said. Ainslie said reimbursement for ambulance services by Medicare, Medicaid and private insurance coverage is limited.

Medicaid reimbursements, for example, only cover 20 percent of the cost of an ambulance call, while Medicare covers 50 percent of ambulance services and private insurance covers 60 percent of a call. According to the city, calls for ambulance service have essentially doubled in 10 years, from 1,076 in 2009 to 2,070 calls in 2018. Ainslie said in 2018 the city provided $277,201 to the Sturgis Volunteer Fire Department and Sturgis Ambulance Service.

He said the total losses for the ambulance service in 2018, including building maintenance insurance and equipment replacement, was $250,798. Calls to a number of campground owners around Sturgis revealed some who were unaware of the Feb. 19 meeting. Others voiced strong opposition to an upfront fee. “They basically have told us if we don’t submit and pay, they’ll deny us ambulance services and we’re not OK with that,” said R.J. Ludwick, of No Name City Campground, located between Sturgis and Tilford along Interstate 90.

“We all pay taxes, and we have higher taxes because of our businesses, and we all feel that’s not right,” Ludwick said. Buffalo Chip Campground owner Rod Woodruff said the campground has a full staff of EMT-trained security that will verify the legitimacy of an ambulance call and take a patient to a pickup point to minimize the time for an ambulance run from Sturgis. “We’re doing that just to help the ambulance service to keep their costs down and eliminate the false calls,” he said.