Jesse James: Some things are more important than motorcycles

Dripping Springs, TX (October 19, 2018) — Jesse James may have an outlaw’s name, but he has long been a friend to law-enforcement officers, including the ones he learned to shoot with when he was a boy growing up in California.

“My dad was a big NRA member and gun proponent,” he says. “He had lots of friends who were with the sheriffs, and we’d go out into the desert in California and shoot.” He turns almost wistful for a second. “Now the desert is all houses.” 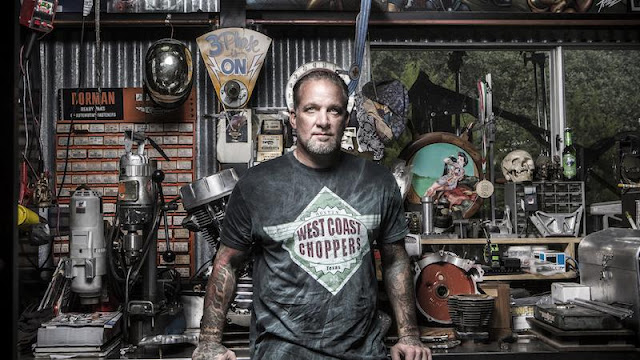 Jesse James has been a lot of things over the years: hamburger-stand operator, motorcycle customizer and proprietor of West Coast Choppers, reality-television star, tabloid villain, and, now, gunsmith and Texas transplant, one among the exodus of Californians who have landed in the Lone Star State to something short of universal acclaim. A fair number of them have brought their politics to Austin from Palo Alto or wherever it was they couldn’t afford to live anymore, and the locals dread the Californication of Texas.

Jesse James, on the other hand, fits in pretty well.

“In 2010, my buzzer went off on California,” he says. He’d been living part-time in Austin since 2004, operating a motorcycle shop there. Eventually, California’s suffocating political and social atmosphere became too much, and he decamped to Texas for good. Moving Day in the Jesse James household is something else: “The amount of stuff you accumulate in two decades is amazing,” he says. He doesn’t mean tennis rackets and hedge clippers. “We had 17 semitrucks full of equipment.”

California isn’t what it used to be, and it’s not just all those stucco three-twos littering the formerly wide-open spaces of the Mojave Desert. The wide-open spirit that once attracted to the West Coast characters ranging from Jack Kerouac to Ronald Reagan has long since been supplanted by the tepid and sanctimonious spirit of progressive nanny-statism, oppressive taxes, endless regulation and Thou Shalt Nots, and the generally dreadful project of trying to convert a glorious strip of the formerly Wild West into Norway with nicer weather. Reagan may have won California in 1984, but, in the end, it was the Miracle Whip–on–Wonder Bread spirit of Walter Mondale that prevailed. Even Sonny Bono couldn’t win an election in the Coachella Valley today.

And nowhere does the shadow of Nurse Ratched fall more darkly in California than on firearms, the right to keep and bear them, and, most important, the class of people inclined to do so. 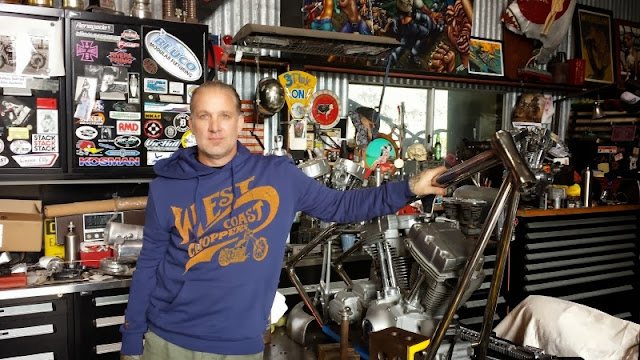 “The gun regulation — I didn’t even realize how bad it was until I moved to Texas,” James says. “I was like: Whoa. It happened when I was in high school, but I wasn’t paying attention.” For much of his time in California, James’s experience with firearms was a lot like that of any other California-based celebrity: the Hollywood version. “We rented a lot of guns for filming Monster Garage,” the reality show in which teams of colorful characters worked to create unlikely mechanical monstrosities, e.g., turning a DeLorean into a hovercraft. Unsuccessful projects were dispatched with dynamite, tank treads, and, on occasion, gunfire. “Full autos, .50-calibers.

But I didn’t realize what it was really like until I bought an AR-15 in the 1990s and it was this weird composite breech-loading thing.” California law requires that AR-style rifles have fixed magazines rather than detachable and swappable ones, which more or less defeats the purpose of an AR. “It kind of made me mad,” he says. And his interest in gunsmithing? “It kind of found me.”

Unlike motorcycles or monster mutant cars, guns become family heirlooms, meaningful in a way that few other things are. “I’ll always build bikes and cars. But a motorcycle is just like a boat. You can sell it on Craigslist. Guns are a personal thing. It provides protection for you and your family, and that gives it a higher meaning. You’re not going to think about showing it off this weekend, but about two generations from now. And that seems more important than motorcycles.” 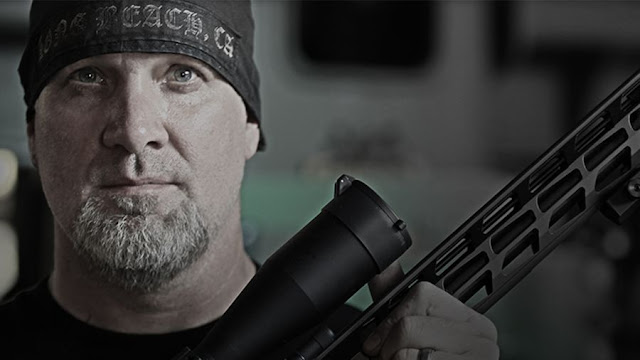 James says that when he decided to get into the gun business, some people assumed he was simply after a paycheck, looking to slap his famous name on someone else’s product. Instead, he undertook a serious course of study, spending time in the shop of master pistol-smith Jim Garthwaite in Pennsylvania. Welding, machining, lathing: not exactly new ground for him.

Jesse James is in many ways emblematic of the enduring but evolving gun culture of the United States. It’s a bright spot in the manufacturing economy, from old-line mass-market companies to low-volume artisanal shops. Once a primarily rural and blue-collar pursuit, the U.S. gun industry has gone urban and upscale: One of James’s more notable creations — a 1911-style automatic pistol hand-forged out of Damascus steel and incorporating a bit of metal taken from the Statue of Liberty during a restoration project — would set you back just a smidgen less than a top-of-the-line Mercedes sedan. Recreational shooting was once mainly about hunting, but today there are many thousands of American firearms that have never had a whitetail in their sights.

And while many Californians are rightly frustrated with the state’s ridiculous magazine regulations, the hot trend in shooting right now is precision marksmanship, dinging twelve-inch steel plates from distances of 2,000 yards and more, with a day at the range meaning only a dozen or so carefully considered shots. Heavy, bolt-action rifles chambered for relatively new rounds such as the 6.5 Creedmoor, which serve no practical purpose other than long-range plinking (most are far too cumbrous to use for hunting), are tough to keep in stock. Big names in gunmaking such as Savage and Ruger have had hits with high-tech precision rifles, but many smaller makers, including Dallas-based Modern Outfitters and Phoenix-based Surgeon Rifles, have got into the market with small-volume precision firearms sold at prices that would have made Oliver Winchester blush.

A great part of the popularity of precision shooting can be attributed to one man: Chris Kyle. The late Navy SEAL and author of American Sniper, who survived four tours in Iraq only to be gunned down by a troubled fellow veteran at a Texas shooting range, has become something of a cult figure. Go to any shooting range and you’ll see young men with the same short neat beard and Merrell hiking boots he sported, and a lot of sheepdog decals on their Jeep Wranglers. (In the moral cosmology of American Sniper, there are three kinds of men: wolves, sheep, and sheepdogs. You want to be a sheepdog.) There are websites dedicated to obsessively documenting the gear he used, from rifles and body armor down to the compass he carried in case his GPS failed. Among his most famous exploits was shooting an enemy sniper from nearly a mile and a quarter away. 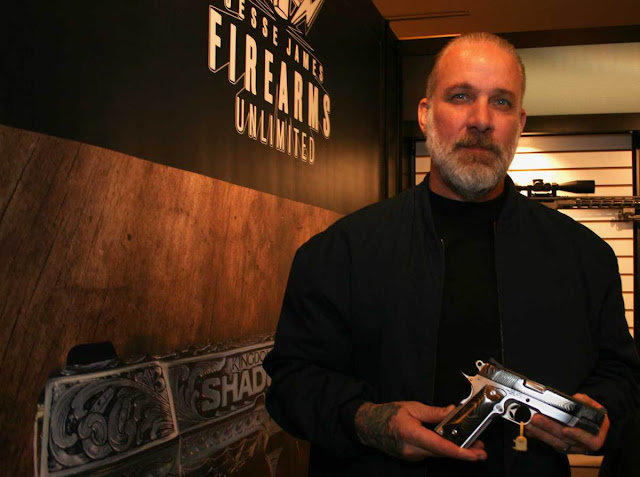 Inescapably, there is a political aspect to this: A statue memorial to Kyle was built with funds raised by tea-party groups. The political charge associated with gun culture is only partly about policy as such. There are the usual familiar debates about the Second Amendment, regulation, and public safety. But the real question at the bottom of it all is: Who are we? And who are we going to be? California? Or Texas?

Many of our current political fissures — which are, at their center, cultural fissures — go back to September 11, 2001, and the emotional and divisive politics associated with the subsequent wars in Afghanistan and Iraq, the PATRIOT Act and associated counter-terrorism measures, and the permanently reordered relationship between the United States and the rest of the world. It was not the finest moment in American political history: On the left, the Iraq War was met with absurd conspiracy theories and irresponsible hyperbole; on the right, “Support the troops!” became a kind of accusation. For subway-riding big-city Democrats and those who aspire to an urban and cosmopolitan life, Barack Obama became the ideal American. For truck-driving country boys and those who identify with them, it was Chris Kyle. That division has touched every aspect of our public life, down to our manners and habits of speech: the confessional invocation of “privilege” in Berkeley, the ritualistic incantation “Thank you for your service” at the Provo airport. 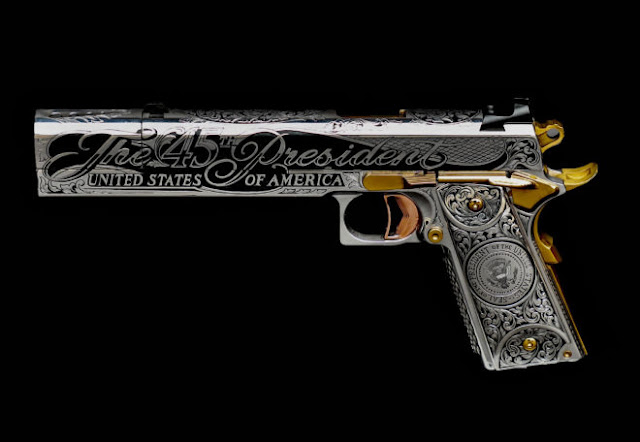 Of course there are gun lovers who voted for Hillary Rodham Clinton. A few of them, anyway. (You could forgive them for not talking about that very much.)

But, by and large, gun country is Trump country.

Jesse James is not exactly eager to talk about politics, but he isn’t shy about it, either. He talked up Donald Trump on Fox News during the campaign and built a rather lovely pistol in his honor. He and Trump go back: He was a contestant on Celebrity Apprentice. Executives at the big gun manufacturers sometimes joked that Barack Obama was the best gun salesman they’d ever seen: Every time President Obama suggested some new restriction on Americans’ Second Amendment rights, the U.S. firearms industry enjoyed another year of record sales. But at James’s end of the market, Trump’s gun policies are probably less relevant than the 2016 tax cuts. “I deal on the extreme high end of the market,” he says. His customers care about the top rate on capital gains.

James used to do a fair amount of business in California, but today he makes only one gun that can be legally sold there. “You can’t sell AR rifles or 1911s, even though that’s a hundred-year-old design. It kind of sucks. That’s where I’m from, and I have friends and relatives there, and people who want to support our stuff but can’t. We shipped 200 pistols to California the week before the ban came down. We spent months filling every California order. I feel bad for people in California. Gun regulations are only the tip of the iceberg. Businesses, automotive shops, everything: You need permits for an air compressor, and if you don’t have one you get a $5,000 fine. It’s dinging the working man.” You can see 1st hand at Jesse James Firearms Unlimited where he has tons more.

And that post-9/11 cultural divide runs through his business, too.