Chicago, Illinois, USA (January 10, 2019) BSB — Responding to growing complaints about packs of reckless motorcycle riders, Chicago police told aldermen they taking a more proactive approach to reining in swarms of bikers who speed down streets and expressways, performing dangerous stunts that put themselves and others at risk. 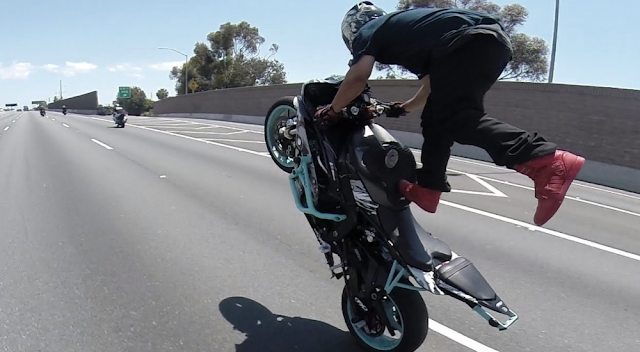 Rather than trying to stop the groups after they’ve started speeding through the city, police said they plan to keep track of the groups on social media, in an effort to stop large stunt rides before they start.

Ald. Pat Dowell (3rd), who called on the Chicago Police Department and OEMC to detail their plans to address the dangerous motorcycle groups, said they often ride in groups of 200 to 300 people, speeding down expressways, Lake Shore Drive, and even side streets, ignoring all traffic laws, and putting other motorists and pedestrians in danger.

Loughran said part of the challenge in cracking down on the groups is that chasing them isn’t worth the risk, because it would only put more lives in danger, and actually give the stunt riders what they want – a chance at making a viral video of a police chase.

“These individuals, the worst bad actors, they’re not stopping. In fact, they want you to chase them,” he said. “Many of the riders actively intend to goad law enforcement, on camera, into chases during these drag races, which only heightens the potential danger.”

Police said they plan to focus on using social media to find out when the groups are planning a ride event, and either putting a stop to dangerous motorcycle rallies before they start, or using helicopters to track the groups until they stop, and then handing out tickets, or making arrests if necessary.

“The key to this is when they’re at the rallying points, and swarming with a task force approach,” Loughran said. “We want to flood that area, and get them off their bikes while they’re revving their bikes.”

Ald. Brendan Reilly (42nd), who said the stunt riders are a frequent problem on Lower Wacker Drive, said police should also rely on a new ordinance the City Council passed last summer, increasing the penalties for street racing. Racing drivers now face fines of $5,000 to $10,000 for each offense. “Lean on that section of the code. Write those violations, because I’ll tell you, a $5,000 ticket, that gets some attention real quick,” Reilly said.

Loughran said police also can sometimes seize a rider’s motorcycle, if they’re arrested for committing a misdemeanor or felony, or if they don’t have the proper license or registration. “A lot of the motorcycle riders will intentionally never have license plates affixed on their vehicle, or will bend the plates up, or will remove them when going on these rides,” he said.

Ald. Brian Hopkins (2nd) introduced an ordinance last year that would have required the city to install six noise monitors along Lake Shore Drive to help document the extent of the problem of noisy motorcycle groups.

However, Hopkins said the city already is authorized to install those monitors under a 2017 state law, and he said the mayor’s office has agreed to install them along Lake Shore Drive this year.

The alderman said the data from the noise monitors not only will help police investigating the motorcycle groups, but provide the City Council with data to determine if any laws need to be changed to improve enforcement.