Indianapolis, IN. USA (March 29, 2019) BSB – James Yacconi, a veteran of four tours of duty in Iraq, is struggling with injuries after a confrontation with another motorist. It happened on South Madison Avenue, where a moment of driver courtesy was followed by brutal road rage, all captured by a Lyft driver’s dash camera “He’s currently on a ventilator and a feeding tube,” said Yacconi’s wife. “Because they haven’t quite wired his mouth shut.“ 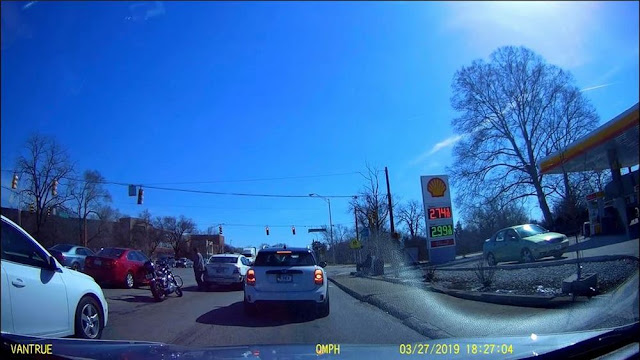 It happened Wednesday evening, not far from Manual High School. “Great sunny day so I decide to go for a quick, small ride,” Yaconni later recalled in a Facebook post. From his motorcycle,Yacconi noticed a problem with a Lyft driver’s car and helpfully let him know. “You got a break light out on that side,” Yaconni told the driver. “Thank you. Alright," the driver responded.

Yacconi recounts: "The guy behind me was laying into his horn, came close to rear-ending and sideswiping me as he goes around and gets in front of me.“ Then, at the next red light at Madison and Pleasant Run, “I’m still behind him and I asked what his problem is. He stormed out of his car. I get off my bike I ask him what his deal was.


All I was doing was helping another guy out by telling him he had a taillight out. Next thing I know, I get double-punched by him wearing two brass knuckles. Yaconni, a U.S. Army veteran, was left with serious jaw injuries. He's in "a lot of pain" according to family. Yaconni followed the Lyft driver to get his dash cam evidence.

He later posted that the Lyft driver said he “does not know how I am still conscious.” He decribed the road rage vehicle as “junky,” a white car missing the rear bumper. Yaconni is still hospitalized, a long road ahead in healing the broken jaw. Family and friends want justice for the victim. If you have information about the incident, you're asked to call IMPD or Crime Stoppers at (317) 262-TIPS.