Future of Republic of Texas Biker Rally in question

Austin, Texas (September 24, 2018) BSB — The future of the largest motorcycle rally in Texas is up in the air after some of the terms under discussion for a new contract with the Travis County Exposition Center, where the event is typically held each year, have organizers unhappy. A major sticking point, Republic of Texas Biker Rally President Jerry Bragg said, is that it’s possible the event won’t have access to the Expo Center’s banquet hall next summer.

Travis County commissioners on Tuesday postponed a vote until next week on whether to lease the banquet hall for the Travis Central Appraisal District to host meetings instead. The $150,420 lease would be from May to August, making the banquet hall unavailable for the Republic of Texas Biker Rally, which is scheduled for June. The lease also would overlap with the Heat Wave car show, which would be in July. 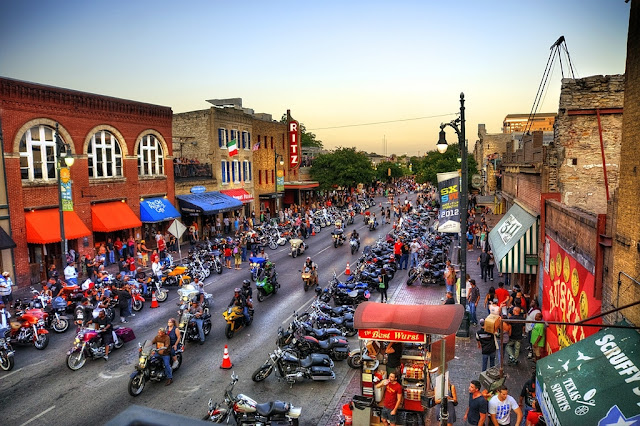 Thousands of bikers enjoy the ROT Biker Rally every year.

Bragg said that not having access to the banquet hall could be a deal-breaker. “If you had an aerial view of our event, you’d see there’s absolutely no room,” Bragg said. “We can’t eliminate any of the buildings and still put on a reasonable event. ... We’re squeezed for space as it is.” County Judge Sarah Eckhardt made it clear Tuesday at the Commissioners Court meeting that she does not think the biker rally and Heat Wave deserve preferential treatment.

"I don't think it's the business of county government to make sure that things like the ROT rally's pole dancing contest and the Heat Wave's bikini contest get a better deal than anyone else who's going to rent the Exposition Center," she said. Travis County spokesman Hector Nieto said he could not talk about the status of the county’s negotiations with Heat Wave, but he said negotiations with the biker rally have stalled because organizers no longer want to work with the county staff and are now only communicating with county commissioners.

“In order for us to negotiate a contract with them, we need them at the table. ... We still have options available to them,” Nieto said.

A staff-written summary of the commissioners’ agenda item says that they have not heard from the rally organizers since they got the proposed license agreement, because “ROT did not like the rates.” County officials proposed that the rally pay about $50,000 to rent the Expo Center next year. The contract previously had been just under $30,000 a year.

“The proposal they sent was ridiculous,” Bragg said, adding that Expo Center officials are now charging them as much for setup days as they do for event days, which leads to a substantial price increase. However, Bragg said he would dedicate the rest of the week to pursuing a solution. Heat Wave owner David MacDonald also said he would "find a way to make it work," though he said Monday that Heat Wave organizers have considered moving the show to Circuit of the Americas as an alternative to the Expo Center.

Randle Jackson, the Expo Center's division manager, said the venue did offer the biker rally a reduced price because it is a longtime customer that has held its event there for multiple years. "If we charged the ROT rally as we would a normal event, it would be well over $100,000," Jackson said.

Rates have gone up to reflect the market, Nieto said. “Like everything else in Travis County, market value is going up, and we have a responsibility to the taxpayers to operate the facility in the black,” Nieto said. The Austin Convention and Visitors Bureau estimated in 2011 that the annual biker rally brings an estimated $36 million into the Austin economy.

"There are a lot of people that enjoy the ROT, and I know the city enjoys them," Commissioner Gerald Daugherty said Tuesday. "We've benefited from them because it's one of the largest events we get revenue out of." Bragg said the rally organizers don't have time to find another location to host their event next year.