Wahoo, Neb (September 23, 2018) BSB — A Nebraska man shared a dying wish with his nephew that involved hundreds of motorcycles.

Bob Money expected to see 20 motorcycles ride by his assisted living home, not the 200 that showed up on Sunday.

"He always wanted people to visit him in Wahoo. I asked some friends to get bikers together. It exploded into an enormous amount of participation from all kinds of bikers. It's totally amazing," said Richard and Linda Money. Richard is Bob's nephew. 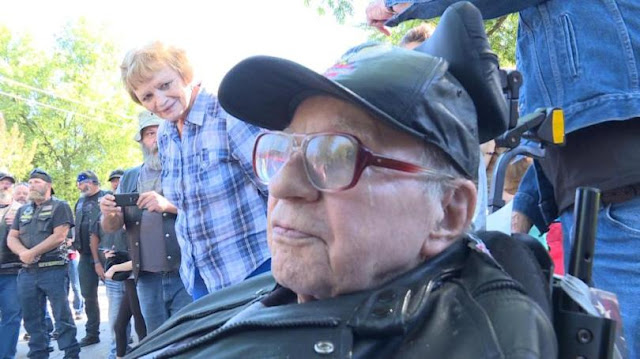 They had just six days to plan the 40 minute bike ride from Omaha to Wahoo to see Uncle Bob.

Most of the riders were total strangers.

"Supporting our veterans is very important. Especially our Vietnam vets who were treated so poorly at first," said Kevin Dubbs of North Bend.

Bob, 77, waited out side of his nursing expectantly. He understands the timing.

"We were informed his heart is running at 15 to 20 percent, and they're not sure how long he's got. A couple of months," Richard said.

As the motorcycle parade crawled by the Liberty House, Bob took it all in.

"I should be crying already, but I held back," said an overwhelmed Bob.

Every rider shook his hand and offered words of gratitude for serving his country.

"The real goal for us was to give him a send-off. To maybe help ease the way as he's passing and that the memory will be front and center in his mind," Linda said.

As the bikers left Wahoo, Bob led the way... at six-miles-per-hour in his wheelchair.

Some of the bikers who attended the Sunday ride traveled from as far as South Dakota.