Harley goes after the Millennial Market

Milwaukee,WI (March 11, 2018) BSB — Coming fresh off the announcement of a disastrous quarterly loss and a factory closure, Milwaukee-based motorcycle company Harley-Davidson did what came naturally: they threw a party.

But unlike company anniversary bashes of years past, this event shunned aging-superstar rock concerts and vainglorious parades as the 115-year old manufacturer set about the business of attracting its next generation of customers – attempting to retake their place as the iconic purveyor of cool amongst today’s fickle millennials. 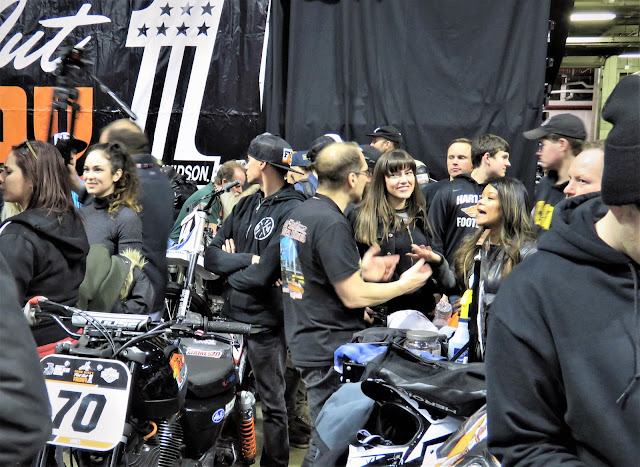 The Flat-Out Friday Event: Harley is going after the younger crowd

Knowing that fashionable young consumers have an aversion to overt marketing, Harley-Davidson has artfully thrown their sponsorship behind Mama Tried, an independent custom motorcycle show and its adjoining Flat-Out Friday event, an indoor flat-track race held in the company’s hometown this past February.

Notably absent were the leather-fringe-and-concho-wearing crowd from Harley’s heyday in the early 2000’s, when dealerships held long waiting lists of buyers and Harley-Davidson was a household synonym for cool. With those folks rapidly aging out of their riding years, the motor company now has its sights set firmly on the young, the hip and the multicultural. 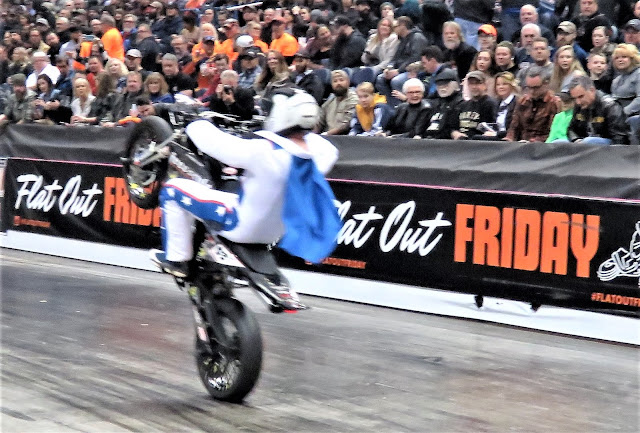 The four-day event began with a number of gatherings emanating from the downtown Harley-Davidson Museum campus. Burn barrels warded off the cold around a hay-baled mini bike racecourse in the museum’s courtyard, while spectators huddled inside the facility’s Motor restaurant, nursing Pabst tallboys.

A quarter-mile south at the boutique Iron Horse hotel, young bike builders sipped barrel-aged bourbon in the moto/industrial decorated lobby. A quarter-mile further on the same street, the Fuel Café was four-deep at the bar – filled with smoke from an exuberant tire burnout within the motorcycle-themed restaurant.

It’s there that I spotted three young guys sneaking one of the mini bikes from the museum races through the crowded tavern. Within a minute it was up on the end of the bar; helmeted-rider aboard and engine revving. 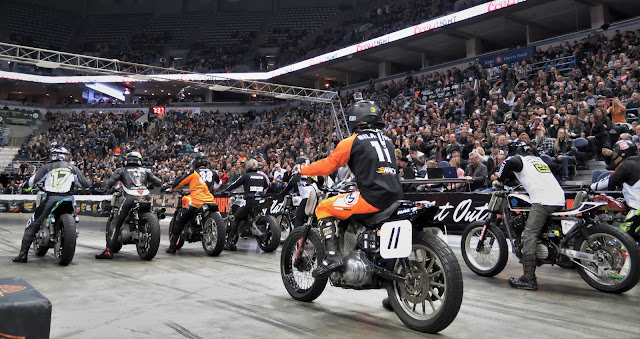 Racers staging for the Hooligan Class

What I anticipated would be a slow victory lap around the oval bar top became a full-on jump and perfectly-nailed landing, narrowly splitting the cheering throng of onlookers. Instantly uploaded to social media, it’s the kind of viral hooliganism that Harley is now happy to outsource.

These are the young people that Harley hopes to attract and develop into the next generation of motorcycle lifestylers.

The sell-job may not be as daunting as it seems. Motorcycles have always been the province of youth, and Harley has remained effortlessly hip from generation to generation. The problem has always been in the product gap; the company’s emphasis on large, expensive touring bikes has disproportionately targeted the interstate wanderlust of baby-boomers at the expense of the excitable youth market.

The company’s new emphasis is being put on its Street, Sportster and Softail model lineups amidst a consolidation of their production line following a January announcement to close its Kansas City assembly plant by the fall of 2019. 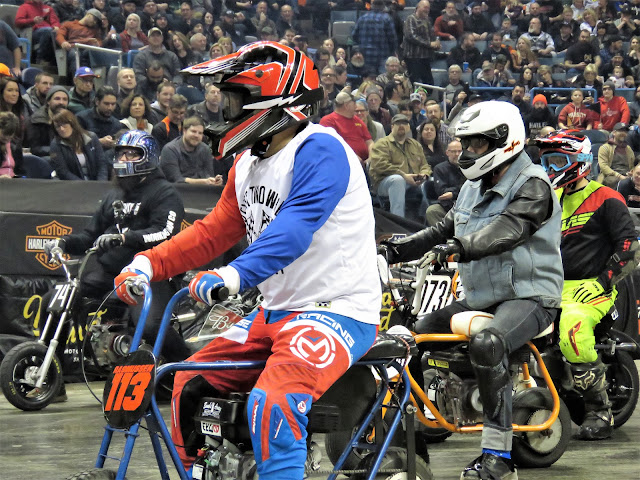 They even had some Mini Bike races just for entertainment

Compared with the larger bikes, the Street is a more urban-friendly motorcycle which now occupies the entry-level position in the company’s catalog. Still, as Flat-Out Friday demonstrated, the Street in the right hands can be flung around a short track and pull crowd-pleasing wheelies.

Harley’s flirtations with entry-level, youth-targeted bikes go back decades. In 1948, Harley offered the Hummer, a single-cylinder 125cc adaptation of the German DKW from patents obtained through war reparations. In 1960, Harley purchased a controlling interest in Italian company Aermacchi, which provided the motorcycle maker with single-cylinder bikes from 90cc to 350cc until it was spun-off in 1978. 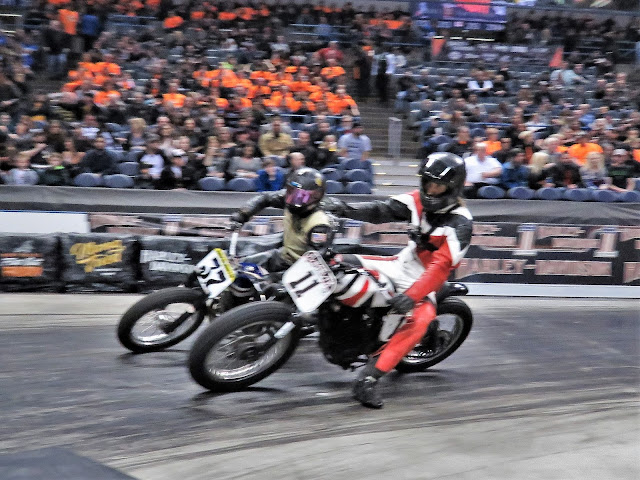 Following the closure of the Buell division in 2009, Harley flailed to expand market share. Repeating history, it bought Italian motorcycle manufacturer MV Agusta in 2008, only to invest millions in the company before selling it back to the previous owner at a loss in 2010.

The company claimed a desire to re-focus on the Harley-Davidson brand, but as recently as June of 2017 it was reportedly moving towards a purchase of Ducati before owner Volkswagen withdrew it from sale. Last week, Harley invested an undisclosed amount in California-based, electric motorcycle-maker Alta. 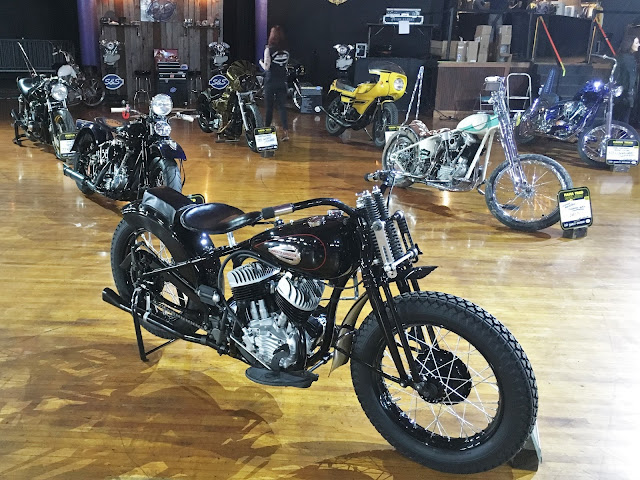 A Harley-Davidson 45ci on display at the Mamma Tried event

Eleven race classes competed, but only half of those were truly competitive. The rest ranged from mini bikes to mopeds, and an outrageous “inappropriate” class which pitted a wheeled-snowmobile against a dirt bike rider in a giraffe suit.

It’s fun and unintimidating stuff that makes you think “Hey, I could to that!”– exactly the impression Harley wants you to take away about motorcycling.

Taking a cue from another of Harley’s proxy media darlings –The Race of Gentlemen – Harley will host field games and a beach race this August at the company’s 115th Anniversary celebration in Milwaukee. It’s an attempt to shift the focus back more on motorcycle riding, and less on partying.

The weekend culminated in the invitational Mama Tried motorcycle show. Held at the 25,000 square-foot Eagles Club ballroom, the 1920’s revivalist architecture provided an elegant, gothic backdrop for the multi-marque custom and classic motorcycles displayed on its hardwood floor.

Harley-Davidson has embraced custom culture like no other motorcycle manufacturer, which provides for a vibrant aftermarket and a network of boutique builders. Vendors filled the anterooms of the facility’s lower levels, offering clever T-shirts and stickers that touted their brand. For many, building a Harley is just as important as riding one. 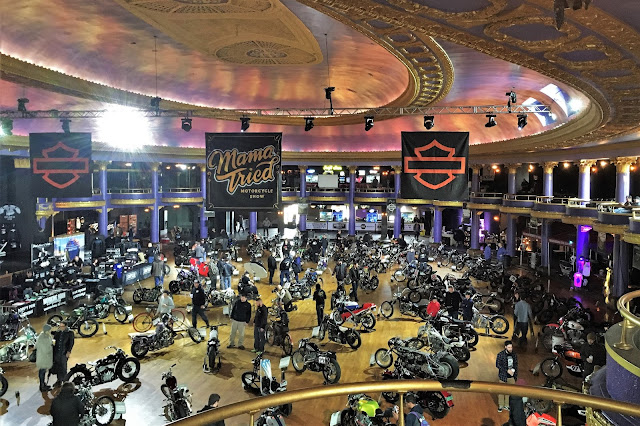 Mama Tried is a well-curated event that deftly balances public access with insider cool – a recipe its main sponsor knows all too well. The show has outgrown its two-previous warehouse loft locales within four years, and by the turnout for this event it looks to be on a similar track. By noon the ballroom exhibition became so crowded that it was nearly impossible to photograph the bikes.

All of which could be described as a champagne problem for Harley-Davidson. Now faced with the potential of retaliatory overseas tariffs which could turn the manufacturer’s plan for European market expansion on its head, the iconic motorcycle maker needs to grow its next generation of customer in its very own backyard. It’s first move towards that goal was to reclaim cool.