Northfield, Massachusett, USA (May 30, 2022)BSB - A Rhode Island man is facing several charges, including operating under the influence, after eight people were injured when he allegedly crashed his SUV into five motorcycles in Northfield on Sunday, according to the Northwestern District Attorney’s Office. 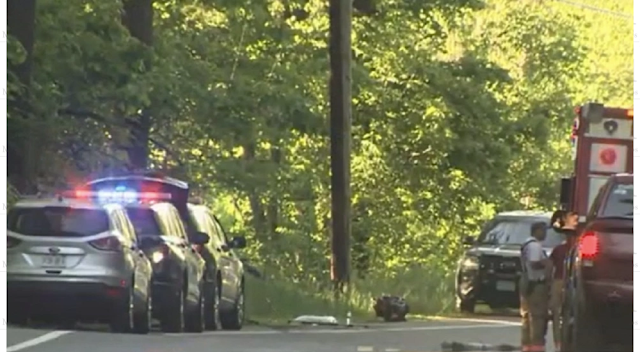 Photo: Northwestern District Attorney’s office on Facebook
Ryan O’Farrell, 32, of Westerly was traveling south in an SUV, which was pulling a motorcycle in a trailer, near 272 Main Street in Northfield around 1:00 p.m. on Sunday, when he allegedly crossed over a solid yellow double center lane and hit five motorcycles heading north, the DA’s office said.

The nine motorcyclists, eight of which were taken to area medical centers, were part of Connecticut motorcycle club that left the Connecticut around 11:00 a.m. on Sunday. Two of the motorcyclists were critically injured in the crash and taken to the University of Massachusetts Medical Center in Worcester, the DA’s office said.

Two children, aged 11 and 12, who were in the SUV with O’Farrell were also taken to the hospital though they appeared to be uninjured.

O’Farrell will be arraigned in Greenfield District Court Tuesday morning. He was held on $250,000 bail, according to the DA’s office. The crash is still under investigation.
at 1:05:00 PM