Palm Coast, Florida, USA (May 21, 2022)BSB - A Florida man has been arrested and charged with assault after pulling a knife on a biker in a road rage confrontation and lunging at him, that's when the biker pulled out a handgun.

The incident occurred shortly after 1:00 P.M. Tuesday, May 17, when police dispatch received six separate 911 calls informing them there was an armed confrontation at Pine Lakes Parkway and Whirlaway Drive. The whole thing was all captured on film, thanks to the biker's wife who was riding pillion. 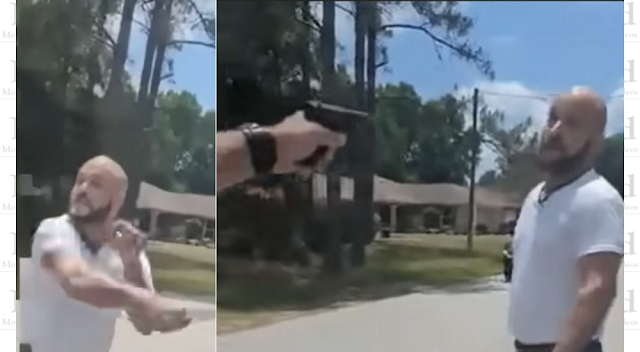 The couple told police that the driver of a Silver Toyota Tacoma had cut them off, and both vehicles pulled over. According to investigators, 50-year-old Rafael Vincent Rivera then emerged from his vehicle armed with a knife. "Concerned there was about to be a physical altercation, the victim grabbed his metallic knuckles," the Sheriff's Office said.

The video shows the two men squaring up, when Rivera slashes at the biker with his knife. Without flinching, the biker calmly reaches inside his leather vest and produces a handgun, which he points at Rivera, who suddenly seems to settle down.

Rivera encourages witnesses to call police, which he then does himself, informing dispatch that someone had just pulled a gun on him. He forgets to mention his own knife, but the biker's wife reminds him she has caught it all on film. Rivera was arrested on a charge of Aggravated Assault with a Deadly Weapon without Intent to Kill, and held on no bond. The biker meanwhile, who is a CCW (Carry Concealed Weapon) license holder, was hit with nothing but praise

"Traffic disagreements should never result in violence in our streets. In this particular incident, the video captured by the victim’s wife clearly shows that her husband's life was threatened," said Flagler County Sheriff Rick Staly. He then added, "I applaud the way the motorcyclist handled this situation." "After his life was clearly threatened, he lawfully defended himself and then de-escalated the situation. The offender is lucky he was not shot."