Augusta, Maine, USA (April 27, 2019) BSB — The National Transportation Safety Board issued a report April 3 on a fatal 2017 crash during the Toy Run parade, a charity ride organized by the United Bikers of Maine.

The event has taken place for roughly 40 years with as many as 3,000 motorcyclists gathering and joining with the cost of admission being a toy that’s then donated to a child in need. But the Sept. 10, 2017 tragedy has caused UBM to pause and reassess the event for the second year in a row. 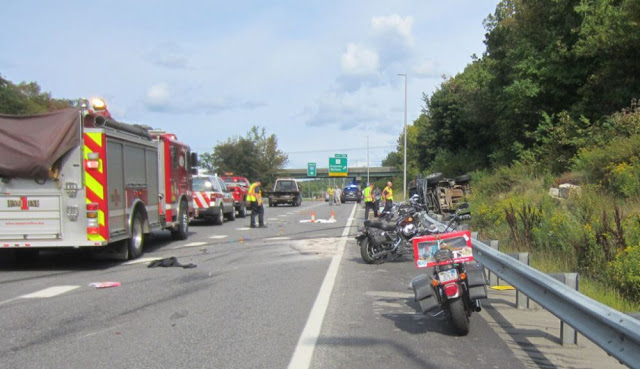 In 2018, the group changed the route of the ride to exclude the stretch of Interstate 95 north in Augusta where the crash happened. In 2019, after the release of the report, UBM announced it would cancel the parade indefinitely.

“If it’s too big to manage, then we need to take a look at it,” said Sandy Lyle, the public relations director for UBM.

The 15 page NTSB report outlines that the one of the motorcyclists, 25-year-old Aaron White-Sevigny of Windsor suddenly crossed from the right to the left lane of the highway and smashed into a pickup truck driven by William Nusom. The truck then spun across the highway, killing another motorcyclist, 58-year-old Jamie Gross, and injuring six other people.

UBM and the Augusta Police Department are cited by the NTSB in its report for not mitigating safety risks like having a state trooper present for the parade.

In past years, a state trooper had been present to manage the highway portion of the ride where Augusta Police have no jurisdiction, but in 2017, there wasn’t one.

“If a state trooper had been there or wouldn’t have been there, that’s Monday morning quarterbacking,” said Lyle. “Safety is paramount.” This year, UBM says it is proceeding with an abundance of caution and will only collect toys at the Augusta Civic Center.


The group’s president, Dave Hasey, says bikers can come and go on their own as they please, but there will be no formal group ride. “The safest move for motorcyclists all the way around was not to have the parade,” said Hasey. “It was a very hard decision.”

The bikers say there is a small chance that a better safety plan could bring back the parade in years to come.

Augusta Police Chief Jared Mills released a written statement earlier this week on the NTSB report saying the department “has the utmost respect for NTSB” and “their best practices will be applied” to city procedure going forward.