San Diego, California (December 14, 2017) — The last time Millie Koenig rode a motorcycle was in 1949, but the feel of the wind in her face and the thrill of the open road was a sensation the 94-year-old Escondido widow never quite got out of her system.

So when Koenig’s retirement home recently offered to grant a wish from her bucket list, she didn’t hesitate. On Saturday, Koenig climbed on a motorcycle once again and rode, as a passenger, in the Escondido Jaycees Christmas Parade.

Dressed in black leather riding chaps and jacket and a festive Christmas sweater and red knit gloves, she beamed and waved to the crowds from the back seat of the 2016 Victory Cross Country Touring cycle piloted by Mick Sobczak, president of the American Legion Riders Chapter 149. 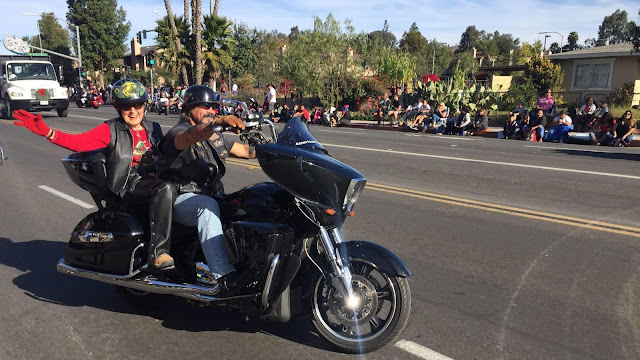 Millie Koenig, 94, waves from the back of Mick Sobczak's motorcycle in the Escondido Jaycees Christmas Parade on Saturday. She was granted her wish to ride again, the first time in 68 years, through a "bucket list" wish-granting program at her Cypress Court retirement home.

“How do I feel? I’m flabbergasted. This is all just so wonderful,” said Koenig, who gave up cycling for more se Motorcycles were a hobby Koenig enjoyed with her first husband when they lived in Big Spring, Texas, from 1947 to 1949. Back then, the couple was so poor they couldn’t afford windshields for their Harley-Davidsons. So to avoid a mouthful of flying insects whenever she rode, Koenig said, in a characteristic quip, “I learned to not talk.”

“It was fascinating,” she said of cycling. “There was plenty of fresh air and I loved it, even when the sands blew. And the people in the motorcycle club were so friendly, even though I was a Yankee.” 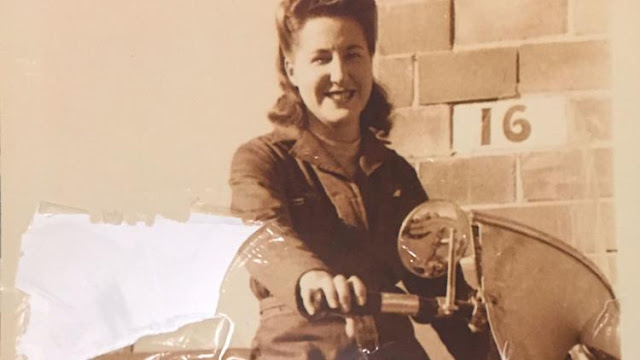 A 1947 photo of Millie Koenig on her Harley-Davidson in Big Spring, Texas. (Millie Koenig)

Koenig was born in 1923 in the Bronx and worked as a secretary in a Manhattan office near the Empire State Building. She was 24 when she met and married her first husband, a war veteran, who moved her to Texas where he’d landed a railroad job.

They lived in a barren housing project where she cooked and heated their bathwater over a kerosene stove. It was a difficult and dreary life, so the local cycling club was a welcome respite. Within two years, her husband lost his job, so they moved to Chula Vista to live with his family and they reluctantly gave up their motorcycles.

Two years after she gave birth to their son, her husband abandoned them right before Christmas in 1953. She realized later he had been suffering from post-traumatic stress disorder from World War II.

Destitute and with no family on the West Coast, she found a job as a secretary in the Chula Vista school district offices and she swore off marriage for good. That was, until she met Fred Koenig, at a local square-dancing party. He was widowed with three boys ages 9 to 12. They married in 1961 and moved to Escondido, where they joined Emmanuel Faith Community Church and he ran a successful plumbing business. 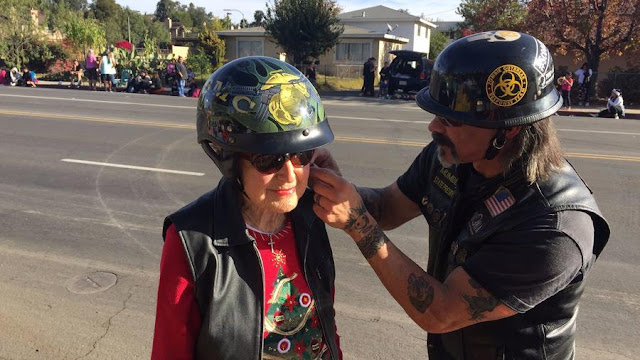 Millie Koenig, 94,is fitted with a motorcycle helmet by Mick Sobczak of the American Legion Riders. She was granted her wish to ride again, the first time in 68 years, through a "bucket list" wish-granting program at her Cypress Court retirement home in Escondido. (Pam Kragen/San Diego U-T)

Life was good until a series of tragedies struck in the 1970s. When Fred’s youngest son was killed in a motorcycle accident, he had a nervous breakdown and could no longer work. Millie went back to work to support her family, this time for the Escondido school district. Then, in 1978, her husband died in a hang-gliding accident.

She credits her deep religious faith with getting her through those difficult years.

“I believe God had a plan for me,” she said. “He never gave me more than I could handle.”

After her husband’s death, Koenig gave up square dancing.

“When you don’t have a partner, you get potluck. I mostly got pot, so I quit,” she joked.

Instead, she took up volunteer work. She collected clothing for orphans in Eastern Europe and went on church mission trips. About 20 years ago, she began volunteering as a reading teacher at Conway Elementary School in Escondido, where she said her greatest reward is “seeing all the kids running up to me to say, ‘Miss Millie! Miss Mille!’” 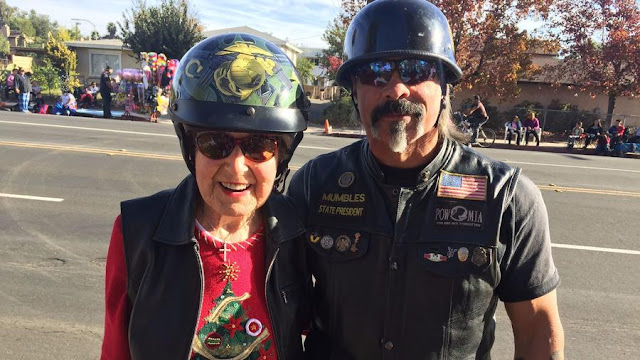 Millie Koenig, 94, with Mick Sobczak of the American Legion Riders. She was granted her wish to ride again, the first time in 68 years, through a "bucket list" wish-granting program at her Cypress Court retirement home in Escondido. (Pam Kragen/San Diego U-T)

“She is who I want to be when I grow up,” said Debbie Gemmill, who runs Conway’s Everyone a Reader program. “In all the things that have happened to Millie over the years, I’ve never been greeted by her with anything but a smile. She’s just a genuinely happy person.”

She started the program in 2012 when a resident on hospice expressed a desire to go shopping one last time. Lucous was able to take the woman to the mall before she died. Since then, Cypress Court has granted four more wishes, including taking one resident up in a tethered hot-air balloon, another para-sailing and a third for a brief sail on a wheelchair-modified catamaran.

In September, 94-year-old Pauline Lawrence had her wish granted to ride a bicycle again. Lawrence was seated on the curb in front of Cypress Court bright and early Saturday morning to watch her friend Koenig roll by in the parade.

“It couldn’t happen to a nicer person,” Lawrence said. “Millie is like the ambassador for Cypress Court. Everyone loves her.”

Lucous said Koenig has become an important part of the greeting committee for new residents at Cypress Court. She crochets hand towels for every newcomer. She also has brought in Conway students to perform for residents.

“Millie is the life of our community,” Lucous said. “Her light shines wherever she goes and she is always doing so much for her fellow residents. We wanted to make this happen for her so that we could give the woman who truly embodies the Cypress Court spirit the opportunity to make her wish come true.”

When Koenig asked Lucous about taking a motorcycle ride, she thought it would just be a quick spin around the block. But Lucous enlisted Sobczak, and he invited Millie for a ride in the parade. Lucous also was invited to ride as the guest of chapter member Gary Teicher.

Motorcycling has come a long way since 1949. Instead of a leather cap and goggles, Koenig wore an aerodynamic helmet with piped-in Christmas music and fancy leather riding gear borrowed from a friend. She’s known for dressing to the nines in thrift-shop finds, and was decked out Saturday in holiday gear from her Christmas tree earrings to her polka-dot socks.

Koenig’s three surviving sons don’t live nearby, so they weren’t on hand to see her ceremonial ride on Saturday. She’ hoping to surprise them with photos when she gathers this Christmas with some of her 16 grandchildren and 26 great-grandchildren.

“My riding days gave me some of my fondest memories and provided me with a sense of courage and independence I don’t know I would’ve found otherwise,” she said. “I’m so excited to be riding again ... and in a parade, too. It’s a once-in-a-lifetime thing.”