Sidney, Australia (December 10, 2017) — How do you teach an Australian stumpy-tailed cattle dog to ride a behind the wheel of a motorcycle? Start by pushing the dog sitting on the motorbike up and down the driveway, said Tex O'Grady who owns the dog, Bundy. Then a lap of the block. Turn the engine on next time. "Eventually that block becomes a lap of Australia," Mr O'Grady said. 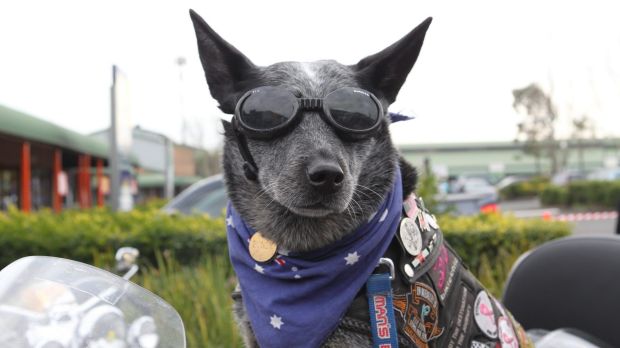 Bundy the cattle dog has now clocked up one million kms behind the wheel of a motorbike to raise funds for charity.  Photo: Helen Nezdropa

Eleven years of riding around Australia turned into 1 million kilometres (without a scratch or a crash) late last month when the two were returning from a quick 3000-kilometre round trip to Broken Hill.

Bundy, 11, and Mr O'Grady, 61, are both recovering from trauma. Bundy broke her back and was paralysed when she was four. She was rehabilitated, with the help of a long support sling under her back, fan letters from children urging the dog and her vet to keep going, and physiotherapy that Mr O'Grady still does before and after long rides.

Mr O'Grady joined the navy at 15, and spent most of his career as a coxswain on a submarine. Most of what he did is still classified. But a few years after leaving the military, he was diagnosed with severe post traumatic stress disorder related to his time at sea, which he said may account for three failed marriages by the time he was 35.

"I went through a couple of marriages, and got a told a couple of times that I needed help." 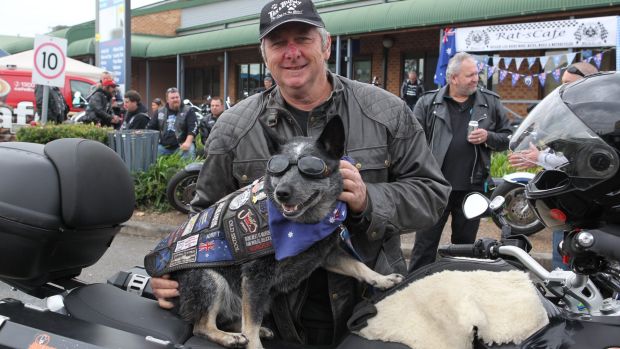 Tex O'Grady and Bundy, who have ridden 1 million kilometres by motorbike for charity.
Photo: Helen Nezdropa

He found if he talked about his PTSD, he could keep on top of it.

"I now ride for PTSD awareness and for emergency services personnel," he said.
Bundy is a registered assistance animal, who received training from non-profit Young Diggers, which trains therapy dogs and veterans suffering from PTSD.

Bundy is the only dog in Australia who has permission - except in the Northern Territory and South Australia - to ride between the handlebar and the driver of a vehicle. Because of Mr O'Grady's PTSD, Bundy was granted an exemption from regulation 297-3 of the Australian Road Rules. It prohibits an animal from riding on the motor bike between the rider and the handlebars.

Sitting on top of the sheepskin-lined petrol tank of Mr O'Grady's Italian Moto Guzzi 1200 Stelvio, Bundy wears goggles, a leather jacket and a harness under the jacket tying the dog to Mr O'Grady.

"If I was to fall off, she would come with me," he said. Mr O'Grady says Bundy is far safer than a dog riding in the back of a ute.

The pair have ridden about 85,000 kilometres around Australia this year to attend fundraisers, from small events for children with rare illnesses to those held by larger organisations.

These include fundraising for Red Nose Day in the Great Australian Ride, the White Ribbon Campaign, prostate cancer, organ donation, the police, and events to raise funds and support for veterans and emergency workers with PTSD. 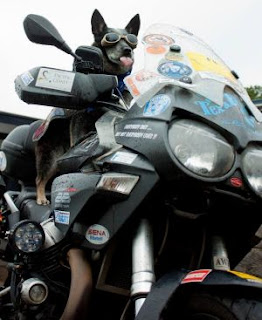 During the week, Mr O'Grady and Bundy also visit nursing homes and hospitals.

After he was diagnosed with PTSD, Mr O'Grady found the only place he felt relaxed was on his motorbike on the open road.

"You are on your own, nobody is inside your head. I love it, there is nothing better than being on the open road on a day like today. Got my dog there. My helmet's full of thoughts, and I am the world's best singer and joke teller until I take it off."

He can't handle confrontation or crowded places. "And I don't sit with my back to the door. If I am sitting in a cafe, I always sit where I can see a door or an entrance."

"Your ability to cope will improve because you are no longer alone in this painful journey; you have a soul mate in your dog who is ever-loyal and compassionate."