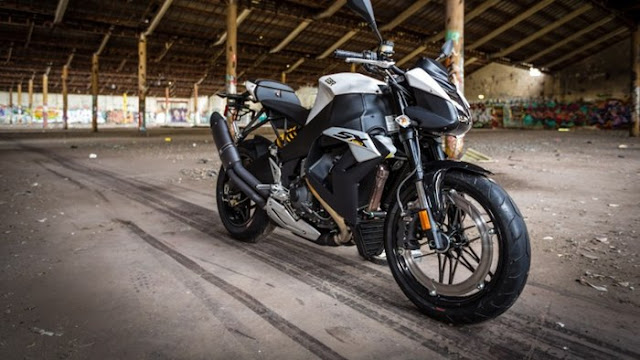 When a liquidation company bought Eric Buell Racing out of bankruptcy in mid-January, many in the motorcycle industry thought it was the end of the manufacturing road for a well-loved name.

“I believe Erik Buell Racing (EBR) has established themselves as one of the premier motorcycle manufacturers in the world and has strong potential as a viable business,” Melvin said in a press release dated January 15th,”Our sale process will enable the proper exposure of the company and price flexibility that may better fit a new owner to move forward with operations.”

These statements were met with a degree of cynicism in the motorcycle industry as well from its media. It appears those critics may need to order a round of humble pie.

A press release issued today invited the motorcycle media and Eric Buell fans, maybe we call them Buellies, to an open house to celebrate the resumption or production at Eric Buell Racing.

‘Get ready to throw a leg over the ‘American Sport Bike,’ turn the key, and twist the throttle! EBR Motorcycles resumes production beginning March 1 with a stable financial plan in place from Liquid Asset Partners,’ the press release reads.

This latest Buell incarnation, EBR Motorcycles, LLC, will start with production of 2016 1190RX and 1190SX motorcycles with the first bikes scheduled to roll off the line March 17th. The moment will be celebrated with the public, Buell Nation, and EBR fans at an EBR launch party on March 18 at the EBR motorcycle factory on Buell Drive in East Troy, WI.

“I am really looking forward to the launch and the press day. I have dedicated my life to this and want to get the word out on how great our motorcycles are,” said Erik Buell, Founder and CTO.

While there will be free food, an EBR team ‘meet and greet,’ tours of the production line and other events at venues in the historic downtown village of East Troy, everyone will surely be there for the motorcycles.

“This would not be possible without the EBR team. All the credit goes to them for waiting out the storms during the last year,” said Bill Melvin Jr. “Now the clouds have cleared; EBR is able to shift into gear knowing that it has financial stability, a profitable multi-year plan, and a 5-10 year vision.”

Now the factory and production line has been positioned to produce motorcycles again, the company needs a distribution network. Consequently, the next steps for EBR Motorcycles are to identify the 2016 top US dealers and to work closely with them for the re-launch.

“It is so good to see the factory coming back to life!” Ed Laben, Director of Sourcing said, “The energy, talent, and enthusiasm of this team are unparalleled, and I can’t wait for the world to see what’s coming down the road.”

Readers may see a lot of new names and titles quoted in the Clutch and Chrome report. Along with the above details, EBR Motorcycles also released the corporate structure and Buellies (yep, we’re using it) will be glad to see the man behind the motorcycles is still firmly in place. New management positions at EBR Motorcycles include:

While all of the above is great news for motorcycle fans, the business plan of optimizing the company is still in place. To this end, assets excess to current factory production will be sold through a public liquidation run by Liquid Asset Partners for approximately 30 to 45 days. This will include excess machinery, equipment, tools, excess race assets, and excess parts.

Excited riders can prepare to buy from the premier dealer network being established and as the company states, ‘helping to grow and solidify EBR Motorcycles in 2016’.

The company has promised more Information on EBR’s aggressive new pricing for the 2016 line-up, what the warranties will look like and as Buell is known for is racing roots, what their plans are for that part of our motorcycle world.